What better way to celebrate the holidays than with a peek at a scene from The Discoveries of Arthur Grey BOOK 4? Not yet seen by anyone else, this is a special little gift just for you! 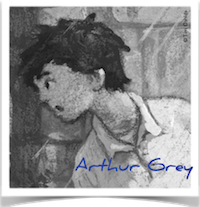 In this next book, Arthur and his dog Griffin get to visit his bubbly friend Pernille and her family in Ireland for Christmas. Arthur is expecting a relaxing time, not an eerie one. Here’s part of that chapter:

Me and my costumes, part 4
Event: Colorado Springs Signing at The Bookman